Over the last 20 years, I have had the privilege of occasionally getting together with some of the Mi Vida Loca cast members. Working on this set was an extraordinary experience because the entire cast was amazing. Some of the actors in the film went on to become out and out movie stars (Salma Hayek, Danny Trejo, Jacob Vargas, Jesse Borrego) and others moved on to pursue different dreams but we all had a bond.

Maybe it was a sign of the times. Being able to work on this film when urban culture was shaping the arts of the decade was something that I will never forget. Fans of this film have made these characters iconic and I am so grateful to have helped create a snapshot of what life was like in the Echo.

First up on the list of homies, has got to be Seidy Lopez, aka Mousie.

You’ll be happy to hear that Mousie and Sadgirl are still friends. We don’t get to see each other a whole lot but when we do we giggle and chat like we always did. Seidy worked quite a bit after playing Mousie in Mi Vida Loca. You can check out her IMDB to see all the projects she was involved in. She has been married for over twenty years and is mom to two beautiful kids.  She doesn’t do social media. She would want you to know that the rumors going around about her being a princess are nonsense. She was born to a humble and hardworking family in the Yucatán and grew up in East Los.

O.k. Now let me tell you a little bit about THIS MAN. Jesse Borrego is a star. Since the 80’s, he’s been consistently working on stage and screen and he has been paving the way for other Latinos in the arts all along. Jesse and I met in New York in 89. He had already been on FAME but it was a performance at The Public Theater that blew me away. His talent is evident, his body of work is impressive but HIS SPIRIT is beyond compare. We don’t often get to see each other but when we do, it’s like family. He always leaves me with nuggets of wisdom. He is always working on something incredible. I admire the love he has for his wife, how he’s a non-preaching vegetarian and how down he is for the barrio!! You can check out some of the things Jesse is up to, on his Facebook Page Krazy Vatos S.A 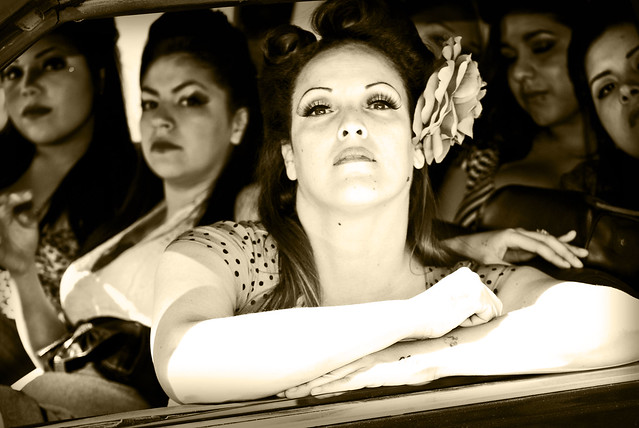 OMG. Who is this HOT WOMAN?

This is none other than La Whisper. These photos were taken by a talented loca named Madeline Alviso. Whisper is a proud mom, still living in Los Angeles, and working to make a good life for herself and her family. I haven’t had a chance to hang out with Whisper in the last 20 years but I come across her online once in a while and I am always happy to hear her point of view. She is a mature, reflective and positive woman. She is also VERY private so Barrio Culture Magazine really lucked out with those awesome shots.

To this day, women will always ask me about this sexy creature.

As you know, Julian Reyes appeared in Mi Vida Loca as Big Sleepy and was also in a number of other projects in the 90’s. A few months ago, I was pleased to find the cop on the motorcycle pulling up in front of my car was actually none other than Papi Chulo, Julian Reyes! All you “Big Sleepy” fans will be happy to know that not only is he still FINE, he is also still a sweetheart!

Well since we covered BIG Sleepy… We’ve also got to cover Lil Sleepy!

Who could forget those eyes!!!! Gabriel Gonzalez – Gabrielito is a singer/songwriter, performance artist, production consultant and does bilingual workshops around Los Angeles. He can be forund performing at Casa 0101 Theater with the Bogaloo Assassins and La Verdad. You will NOT believe the talent our Lil Sleepy has. I had the pleasure of checking out this cantante and WOW! As a matter of fact, here’s a little treat for you. Check him out….

And just so you know…

Gabrielito is not alone in his pursuit of the musical arts. Here we have Giggles, who after a few more years of acting decided to devote her life to her family and her music. Marlo Marron can also be found on FACEBOOK.

Who can forget Babydoll going around with a vato from another neighborhood?

Well, she didn’t go too far away from us. She’s mom to four amazing kids. She is always posting videos of her hilarious and talented tribe on Facebook. I will add that she is raising her kids on her own because she is a widow. And if you follow her, you will sometimes see that she still shouts out to her true vato Bobby Caron. RIP.  🙁

If you have lived under a rock, you may not know…

Ernesto aka Jacob Vargas is a flipping legend! I still watch his monolog with Whisper in complete awe. Jacob Vargas is not only commercially successful, he is an artisan who is committed to several FIRME causes.

We also have the pleasure of doing many meet and greets with one of the original locas from Echo Park. Vero Arellano aka Stranger manages the  Echo Park Mi Vida Loca page on Facebook but she is also one of the 30 inspiring women featured on Living Firme Podcast. Check her episode out HERE.I’m glad you came by to catch up with the cast of Mi Vida Loca! Something special is on the agenda for 2018 so stay tuned!

For those of you that have asked, the film can be found on AMAZON. Or you can buy a signed copy from me HERE.

The other side of disappointment.

What is she TALKING about?!!!